First, an update about relaxing.  I hope you’re not worrying about me being too busy on my vacation.  The past several days I’ve been dreaming A LOT.  That’s a sign for me that I’ve really been sleeping well.  And – I’ve been sleeping in –  ’til 8am or so.  It’s amazing.  I also haven’t been doing as many projects.  I’ve just been kind of aimlessly doing things.   For example, I happened to end up polishing 3 pairs of shoes yesterday.   It wasn’t this massive project or anything – just a random thing to do that I actually thought about doing when I had some time to do it.

I wish I could have been Kyle yesterday (or at least known exactly what was going through his mind so I could update the blog with his perspective). When he came home from work, I was watching a Netflix movie standing up in the middle of the room….yo-yo-ing.

So – I’m definitely relaxing.  And of course, I’m just getting into the rhythm of relaxation and then it’ll be time to go back to work.  Ah…such is life.

I wanted to say Happy New Year.  We just finished an AMAZING steak dinner.  We both agreed that it was the potatoes that really made the dinner.  Part of our Christmas gift from Kyle’s Uncle was a handful of homegrown potatoes.  They resembled little fingerling potatoes and I roasted them with garlic, salt, pepper, parsley, and olive oil.  MMMMmmmmmm.  They were SO good.  So – we had steak and mushrooms, roasted potatoes, and salad (Cesar for Kyle and Greek forAmy).  And of course – red wine.  What a way to bring in the new year.

I’ve been thinking a lot about New Year’s Resolutions lately, too.  One of my most successful resolutions one year was to take more pictures.  This year, I think Kyle and I both have health on the forefront of our minds and specifically desire to fit in regular workouts and eating healthy.  So we’ll see how that goes especially after that delicious steak dinner.  🙂  I’m also constantly seeking to be more green in the way that I live my life.  I usually only have coffee out if I’m using a gift card, so it’s not super frequently, but I still think I can be more green when I drink coffee out.  So – my newest idea for a resolution is to be intentional about requesting my Starbucks order “for here” if I know that I’m going to be sitting in the store (since they assume that you want a to-go cup) and to remember to bring my own insulated coffee mug to coffee shops if I know I’ll be taking my order to-go.

I definitely have a couple other resolutions in mind, but it’s tough to have too many things to work on all at once.  🙂  We are already hearing fireworks here in Seattle and it’s only 9pm our time.  I guess that means it’s the New Year for all our friends and family in the East Coast.  Welcome to 2010 – we’ll join you in 3 hours. 🙂

Today marks Amy’s 7th day of vacation (not counting the weekends).  🙂  The funny part is that I usually feel busier on vacation than during a regular work week.

I suppose there should be two qualifiers to my previous statement:

1) When I say vacation, I’m really talking about a “stay-cation”.  Kyle works during all of my school vacations so it’s just me who has all kinds of unscheduled time on my hands.

2) It’s not that I don’t stay busy during the regular work week.  In fact, I’m usually WAY too busy with work to think about doing much of any of my projects at home.  So, the busyness of vacation that I’m referring to is primarily staying busy around the house; not being busy with all kinds of activities and events.

That being said, let me list a couple of things that have kept me busy:

When I list out the things that have been occupying my time, it doesn’t sound like that much, but somehow, I’ve felt extrememly busy.  I guess because along with all the making and wrapping of gifts and food there is a coexisting element of making a big mess that then needs to be cleaned up.  And in addition to all of the holiday busyness, there’s also the everyday busyness of bill-paying, expense-tracking, keeping the floors swept, and making sure we have enough clean laundry so that when I choose to wear something other than sweatpants, I actually have something clean to wear. 🙂

It goes without saying that I would make the perfect old-fashioned housewife because this kind of busyness is clearly life-giving for me.  I take pride in keeping a clean and organized home, making yummy meals and treats from start to finish, buying things on sale (and with a coupon!), staying healthy by exercising, and creating useful keepsakes.

The problem with this personal tendency towards staying busy around the house is that I have trouble relaxing.  Yesterday was the closest I’ve come.  It was the one vacation day Kyle requested so we actually got to spend the day together.  I made scones for breakfast, we took a long walk in a new place, we went out for Jimmy John’s subs for lunch, and saw “Up in the Air” while demolishing a huge tub of movie theater popcorn.  It truly felt like vacation, but by the time I got home, I didn’t quite know what to do with myself.  I knew if I tried to sit around at home, I’d quickly find myself in the midst of some project.  So….I left…to go to the gym.  (Yes, I am one of these people that genuinely likes going to the gym.)

There are a lot of times I wish I could be content with sitting around reading and watching movies and drinking cups of tea or glasses of wine.  But, the reality for me is that I have a personality that desires all of the work to be done before I can sit down and just relax.  And – the unfortunate thing is that just like the mouse from “If you Give a Mouse a Cookie…”, everything I look at that needs to be done makes me think of something else that should be done.  (Example – the Christmas CDs need to be re-shelved right now.  And – looking at the Christmas CDs makes me think that it would be good if I could get some sort of organization system together to properly put away our Christmas decorations.  And thinking of putting away decorations makes me think of….  Do you see how this works now??)

So – It’s day 7 into my vacation and I’m battling with the oxymoron of loving the life-giving busyness of getting things done around the house that I usually struggle to find the time for, and in the same breath, wishing I could stop myself from being so busy to find the time to relax because I really can’t relax when there is the stress of work in the background of my mind on a normal week.

Needless to say, this vacation is one in which I am learning to relax.  And parting of learning about relaxation for me is that I am a person who feels much more relaxed when I have time in life to do the things that I take great pride in.

I have one more random note about our Thanksgiving trip.  Kyle and I had our first “co-couple” sleepover in a hotel room.  We roomed with my friend Jenna (from college) and her husband Adam for the wedding weekend.  If you’ve never shared a hotel room – and I’m talking about your standard room with 2 queen beds in it – it’s actually pretty fun.  None of us were really sure what to expect, but it was easy.

Anyway – here’s a picture of our “room” all dressed up at the wedding.

Thanksgiving in MI was swell.  Being with family and seeing old friends was just the right pick-me-up.  (And, in case you were wondering, the packing went just fine.  It always does, but I just always stress about it.)

We had fun in Chicago at the wedding of my friend, Chrissy, from college.  I’m pretty confident this was the biggest gathering of Hope friends we’ve had since graduation in 2005.  The only people missing in this picture are the bride, Chrissy, and one of her bride’s maids, Andrea.  That  makes for a total of 9 Hope friends, 6 of their spouses, 2 of their kids, and 3 of their kids in the womb!

Thanksgiving week was full of playing, 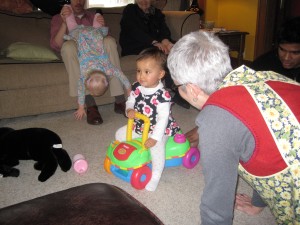 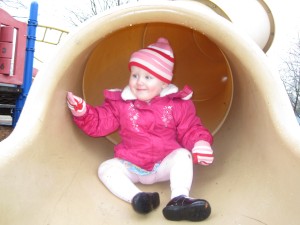 anticipation of great food (not just on Thanksgiving day, but all week long),

and smiling a lot. 🙂

It was a great week to say the least.

Returning to work was as expected: busy and stressful at times.  But, on Wednesday, we had tickets to go see Blind Pilot, which is a band we’ve taken a liking to.  The only unfortunate thing is that there were two opening bands, so while the doors opened at 8pm, the start time for  Blind Pilot was 11:20 pm.  We really liked the music of the opening bands, and of course, Blind Pilot was great, but, by the time we got home and into bed, it was 12:45am.  That’s not my ideal bedtime on a Wednesday night considering my alarm clock was set for my typical 5am wake-up.

We both made it through to the end of the week, though.  Our Friday night felt like the ideal night to recuperate after a long work week  – especially a week that had included a late night midweek! 🙂  We had a steak dinner at home with a nice bottle of wine and then we finished a puzzle we had started the previous Sunday.  I’m pretty sure we did about 3/4 of the 750 piece puzzle. Kyle and I both really like doing jigsaw puzzles.  In fact, the very first time I came out to Seattle to visit him, we worked on puzzle throughout the week.  We’re usually extremely competitive, but last night felt really relaxed and like we were working as a team rather than competing to get the most done.  We just sat there…talking, puzzling, and drinking wine.  Pretty unexpected Friday night for a couple of 26 year olds, eh? 🙂

The biggest excitement of the weekend, though, is that our house is full of Christmas cheer now!  We bought some lights for the outside of our house and got them strung today.

(You can’t see this in the photo, but we actually had a few snow flurries this evening!!!)

It’s just a little 4′ tree!  It’s a cute little tree to bring some Christmas cheer to our cute little house.